Based on hiked interest rates and the ongoing Russia-Ukraine war, crypto whales have shown signs of caution, given that their transaction volumes have been dwindling. 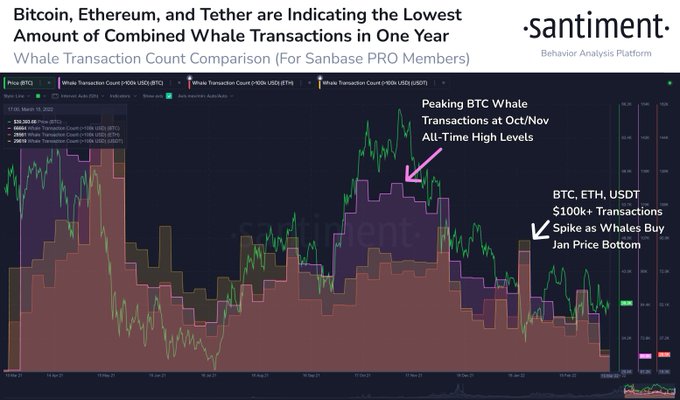 After the onset of Russia’s invasion of Ukraine on Feb.24, the crypto market nosedived, with Bitcoin hitting lows of $34K.

Even though the leading cryptocurrency has reclaimed the $40,000 area, uncertainty continues to rock the crypto market as the geopolitical turmoil between Russia and Ukraine ravages.

With inflation hitting a 40-year high in the United States at 7.9%, the Federal Reserve (Fed) has resorted to increasing interest rates. Therefore, to tame fast-rising prices, the Fed has raised interest rates, a scenario not seen since 2018.

As a result, these factors are making crypto whales adopt a wait-and-see approach.

In a recent Bloomberg interview, Galaxy Digital CEO Mike Novogratz opined that Bitcoin would struggle to make massive rallies in the current environment. He noted:

“I don’t think Bitcoin can rally aggressively until we get a pause. Bitcoin is a narrative story; it’s bringing people into the community. It’s hard to bring in new people when their house is on fire.”

Meanwhile, the Russia-Ukraine conflict might accelerate the issuance of central bank digital currencies (CBDCs), according to a former Bank of Japan (BOJ) executive Hiromi Yamaoka.

He opined that more countries might follow China’s footsteps because CBDCs will counter the dollar’s supremacy in the global financial system.